Every offseason, their are trades and free agent signings that find stars in new places and new jerseys. ISH will break down several superstars who are likely to end up on different teams next season.

Why New York does it: The Knicks are too old and financially screwed to offer Carmelo Anthony a legitimate shot at titles. By trading him here, they get a solid former PG in Jeremy Lin, a solid center in Omer Asik, a star wing in Chandler Parsons, and a first rounder for next season. This trade makes New York perhaps a playoff team next season with a decent starting lineup of Jeremy Lin, Tim Hardaway Jr., Chandler Parsons, Omer Asik, and Tyson Chandler. While that team does not have a star, it still can win plenty of games. You may ask, why would New York pass their only shot a superstar up for this motley bunch? They are not. They free up loads of cap space for the 2015 offseason where they can go after guys like Kevin Love AND Rajon Rondo (or many other stars). Losing Melo is not what anyone wants in New York, but it is in the best interest of the team’s future.

Why Houston does it: Houston has been shown this postseason that their roster is far from a title contender. With the only real offensive threats being Dwight Howard, James Harden, and Chandler Parsons, Houston needs some help. They also need a bench, but finding a threat as a scoring option is the most important need this offseason. Why not bring in the second leading scorer in the NBA? Anthony would take a while to mesh with the other stars, but this big 3 in Houston could really make noise out west. A starting lineup of Patrick Beverely, James Harden, Carmelo Anthony, Terrence Jones, and Dwight Howard is scary. It would definitely have the most star power besides the Miami Heat. If these players clicked, Houston would not regret giving up so much for Carmelo.

Why Boston does it: Boston gets here a former All Star point guard (Holiday) , a young player that still has untapped potential (Rivers), and a chance at possibly 2 top eight picks in this 2014 NBA draft lottery. They could bring in a younger, starting caliber point man in Holiday and help build around him and their draft pick(s) this offseason. This would make a lineup for Boston of Holiday, 2 possible lottery picks (if NOP draws the right balls), Jared Sullinger, and Kelly Olynyk.

Why New Orleans does it:

New Orleans get an absolute overhaul with this deal. They pair their star big man Anthony Davis and solid swingman Tyreke Evans with one of the top point guards in the league in Rajon Rondo. They could finally be taken seriously, no matter how hard that is with a name like Pelicans. A starting lineup of Rondo, Anderson, Evans, Davis, and a player to be revealed later in the article will be one tough team to get past. 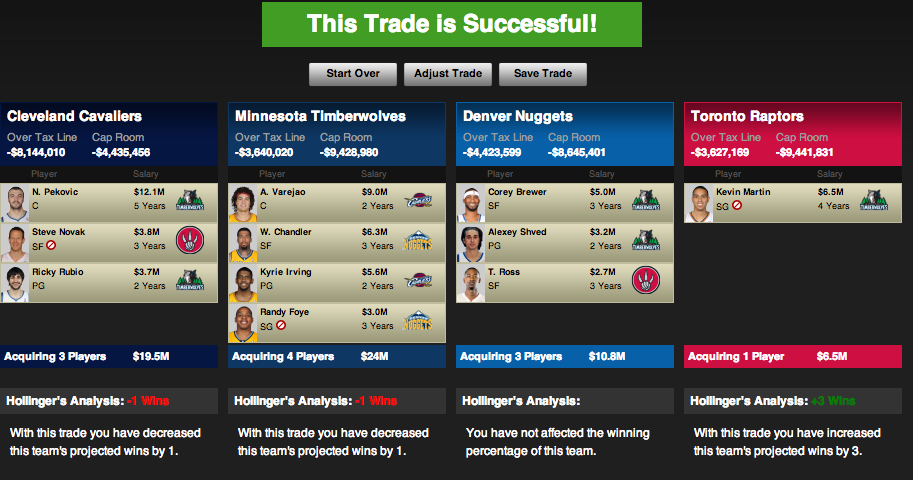 Why Cleveland does it:

Tell me they would not do that instantly.

Cleveland gets better immediately and in the long term with this deal. They get future All Star Nikola Pekovic, a solid point guard that can really change the culture of the team in Ricky Rubio, and sharpshooter Steve Novak. They also get a 2014 lottery pick and a 2015 first rounder.

It is hard to think trading Kyrie Irving is the best thing for Cleveland to do right now, but the truth is the truth. This deal makes them a fringe playoff team next year and a solid team for many years to come as their 2 draft picks develop. They also do not give up any young talent that has not developed yet ( like Sergey Karasev).

Cleveland knows that Irving won’t stay. If they don’t know, then they are the only ones who do not. Flipping him for future pieces, building blocks, and veteran presences is far from the worst they could do. Dion Waiters, Tristan Thompson, Nikola Pekovic, and Ricky Rubio is a good core to start their rebuild with.

Why Minnesota does it:

Minnesota fills every hole in their roster with this deal. They can plug Wilson Chandler in on the wing, Foye at two guard, Irving at the point, and Varejao at backup big. They get a superstar that could finally change the losing ways of Minnesota.

And the best part?

Kevin Love would LOVE it.

This deal is not about getting Irving, it’s about keeping Love. To do that, why not pair him with a top 5 point guard in the league? The Wolves do not lose anything that they do not replace in the trade and the only loss that would hurt are the draft picks. I do not think the Timberwolves organization will notice the absence of rookies, though, if they are too busy winning games at the top of the Western conference.

why Denver does it:

Denver is spiraling to a sad state of less-than-mediocre. For that to change, they need to take some risks. Giving up veterans Randy Foye and Wilson Chandler is not a huge risk. What is a huge risk is banking on the fact that Terrence Ross grows into a lights out scorer that he has done a few times before. Also, bringing back Corey Brewer and adding a good young guard in Shved will also help pull the Nuggets out of their new state of win some-lose some. They also get a 2014 first round pick that could easily end up as a starter for this team.

Why Toronto does it:

Toronto gives up a 2014 first round pick (projected to be around #20), but shores up a hole in their offense.

The Toronto Raptors shot just 31.8% from 3 this season, making just 7 of 22 per game on average. Kevin Martin shoots 39% from 3 and is one of the best catch and shoot guards in the league. Move DeRozan to small forward, start Martin alongside Kyle Lowry in the backcourt ,and be amazed. The current shooting guard Terrence Ross has been a no show all postseason and, while he has huge potential, the Raps are ready to win now. Putting Martin in and taking Ross out would result in a more dangerous Raptors team next season.

Why Chicago does it:

Chicago will need all the help they can get building a contender next year. If they do not end up with Carmelo Anthony (which is what I predict), they will need to add more scoring and better players to start and come off the bench.

The Bulls got decimated this year in the playoffs, and things are starting to show that there is not a great team for Derrick Rose to return to.

Adding Afflalo gives them a top 10 shooting guard in the league and could easily end their shooting woes. D. J. Augustin was their leading scorer this year. Afflalo averaged 5 more points than Augustin did this past season (18). The Bulls need a second scorer and AA fits their scheme perfectly.

Why Orlando does it:

Orlando has a chance here to flip Afflalo for their 3rd top 20 2014 first round pick. While Afflalo is a great player, he does not fill needs for Orlando right now as they are coming along in their rebuilding. Adding another rookie would be best for the Magic.

Why New Orleans does it: New Orleans sheds Eric Gordon’s bad contract for 2 healthy, solid contributors. Splitter does have a bit of a fat contract, but he plays more and better minutes than the fragile Gordon.He could start alongside Anthony Davis or come off the bench.

Danny Green is very underrated and, on a team that he could be a key offensive contributor, he could exceed all expectations. A starting lineup of Rondo, Green, Evans, Anderson, and Davis would be a playoff contender.

Why San Antonio does it:

San Antonio is not getting any younger and Eric Gordon could bring some welcome youth to this team.

You may ask “But they are trading away 2 of their youngest players!”.

This is not entirely true. Danny Green is already 26 and Splitter is 29. The only reason you think they are young is in comparison to their ancient teammates.

Getting Eric Gordon under a coach who finally knows what he is doing (no offense Monty Williams, offense intended Vinny Del Negro)  in Gregg Popovich would be the ultimate saver for Gordon’s career.  He could really tap into his potential if he had the right system. Maybe some success is all he needs. Thats exactly what the Spurs can provide him.