Less than an hour ago, the 2015 French Open began its 8,424-hour break when 8-seed Stanislas Wawrinka bludgeoned his way to the Men’s Singles title over top-seed Novak Djokovic. Throughout the two weeks, the unforgiving clay claimed many victims and left with some predictable, and some surprising, victors. ISH predicted both the singles champions, but we learned so much more during the tournament. Here are the top-eight takeaways from the French Open.

1. American Men’s Tennis Has a Future on Clay

Clay is the bane of American tennis’ existence. Not since Andre Agassi in 1999 has a man lifted the title, and only the huge games of Serena Williams and Jennifer Capriati penetrated the surface enough for championships since 1986. More on Serena’s win later, but first, the young Americans in the adult and youth draws strung together impressive resumes to give immediate and elongated hope.

In the Men’s Singles draw, Jack Sock reached the fourth round only to be edged out by the greatest clay court player in history. Taking a set from Nadal, in addition to his first round upset victory over ten-seed Grigor Dimitrov, shows that his inaugural title in Houston was no fluke. On the Women’s Singles side, Sloane Stephens nearly defeated Serena Williams again in the fourth round, indicating that with more favorable draws, deeper runs are in store.

In the junior tournaments, the singles and doubles late rounds were peppered with American flags. Tommy Paul won just the third French Open Boys’ title for an American, defeating fellow countrykid Taylor Harry Fritz in the finals. The semifinals had three Americans, and the doubles draw saw Paul and partner William Blumberg take second. Similar results held in the Girls’ section of the tournament. Katerina Stewart made the quarterfinals of the singles and the finals of the doubles with partner Caroline Dolehide, and Catherine Bellis made the semifinals. Though junior success does not always portend professional accomplishments, seeing American juniors master the clay is a major step forward.

2. The Serena Slam Lives On

Facing tough opponents throughout the tournament, the coronation of Serena Williams was hard-fought but somehow never in doubt. Even during her closest three-set matches versus Grand Slam mainstays, the extra gear she tapped into reminded opponents and viewers alike why she’s holding a nearly 5,000 point lead above the second-ranked player in the world. The last two times she’s captured the French, she also won the U.S. Open, a tournament she’s won three straight times. With that tournament a near guarantee, Wimbledon remains the only question mark on seeing a calendar year Grand Slam (and prevention of the SI Sportsman of the Year going to a non-human, predicts tennis writer Ben Rothenberg).

Commentators and players alike expressed disdain over the French Open’s refusal to adopt the Hawk-Eye technology to assist umpires in line calls. Frenchwoman Alize Cornet’s outburst against an umpire and agreeing words by former #1 Victoria Azarenka added to the chorus of correcting calls shown on television screens during major network broadcasts. Commentators were continually perplexed by what seemed like an uptick in human errors compared to the normally good (no John Buccigross) umpires’ eyes. With even conservative Major League Baseball adopting a challenge system that has a nearly half-and-half success split rate, it would only make sense to augment accuracy in tennis’ last major holdout.

Yesterday I predicted why Stan Wawrinka would beat Novak Djokovic in four sets, and he did nearly everything my backseat coaching told him to. I wrote that he needed to at least match his serving numbers from his 2014 Aussie Open win over Nole, and he did, winning 76% of his first serve points and 50% of his second serve points. Nine aces assisted the stats, and making 67% of his first serves was his highest mark of the tournament. He becomes the second Swiss man with a one-handed backhand to win the French Open since 2009, and used that backhand to demolish the world-class movement of the world number one. He roped one of the greatest shots ever hit in a match full of exhilarating moments, and never relinquished control of the match following the first set. His best finish at Wimbledon is last year’s run to the quarterfinals, but being ranked third in the world gives the best chance for a favorable draw to make a deeper run in 2015. No matter the finish, Stan’s solidified himself as one of the world’s best in an impressively late career stage.

No matter what happens, we can only hope his outfit remains throughout the year. The All-England Club should allow a special exemption for such advances in fashion. 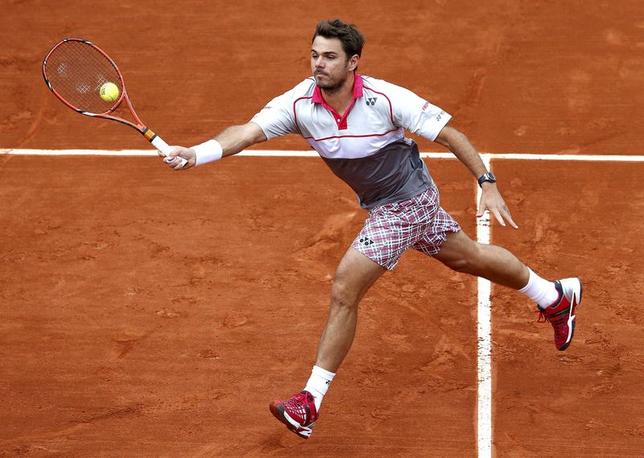