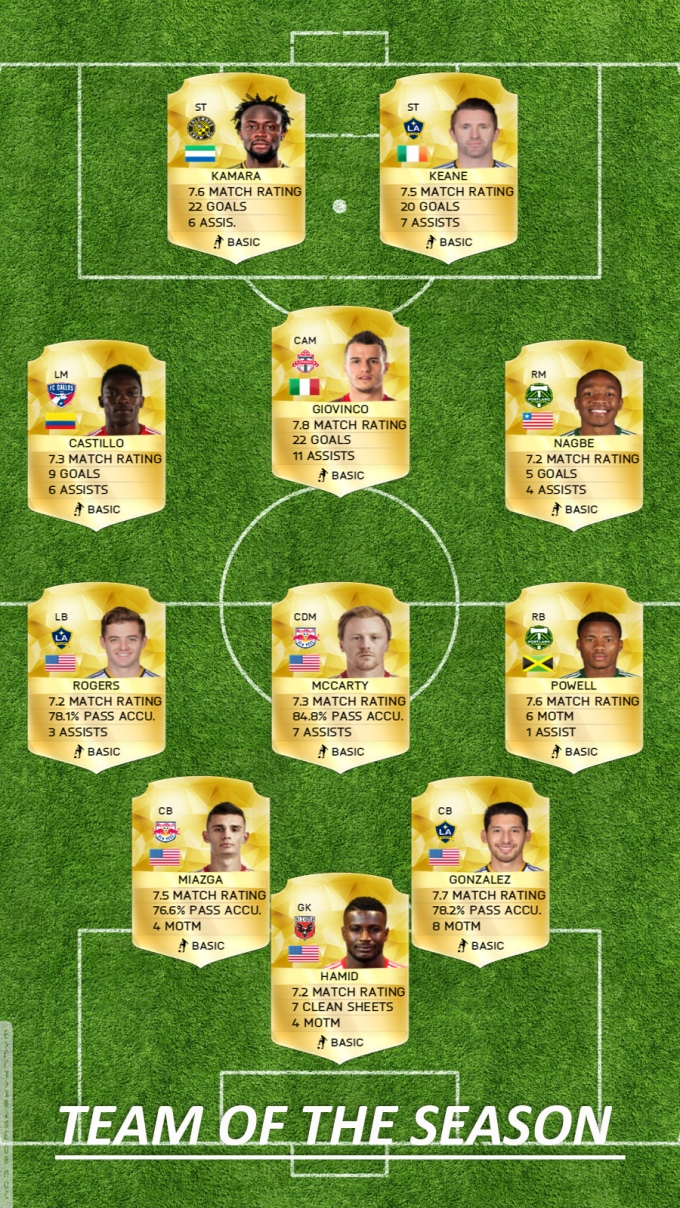 In 2015, Major League Soccer has placed offense in full display. Not every team has formidable defenders and as a result, offensive output has increased. However there are a few talented defenders across the league worthy of recognition. Matt Miazga, New York Red Bulls’ young center-half, has shown why he is deserving of hype and labels as the future centerpiece of the USMNT. He isn’t flashy, but he does necessary tasks in order to keep the Red Bulls competitive as one of the best defenses in Major League Soccer.

For the majority of this season, Darlington Nagbe has made an impact but it went unnoticed. Over the past few weeks, Nagbe is showing why Jurgen Klinsmann wants to make him an essential part of the US Men’s National Team. With three goals, two assists, and a match rating of 8.03 in his five previous appearances, it is apparent that Nagbe and Portland are peaking at the right time. If Portland is to make a run at the MLS Cup, we should expect more of this to come.

I have run out of superlatives for Sebastian Giovinco. He has been absolutely incredible this season. With 22 goals and 16 assists to his name, it is safe to say that he has earned the $7 Million Per Year contract provided by Toronto FC. I firmly believe that Giovinco is the most influential player in MLS history. While many will argue that Landon Donovan was more iconic, it is hard to deny the impact that Giovinco has had on Toronto FC, Major League Soccer, and Europe’s increasing respect for American Soccer. It is too early to predict, but if Giovinco remains healthy and dangerous, we may see him represent Italy in the 2016 Euros.

3. Marco Donadel smashes one from long-range

Hands down, Luis Robles double save versus Portland, showed why he’s among the best in Major League Soccer. Robles kept free-kick, despite the deflection, out of the net and prevented Nat Borchers from scoring on the rebound. If Portland were able to take advantage of this chance, the Red Bulls would’ve had a tough time being able to walk away with all three points. This game proved to be crucial in New York’s run to winning the MLS Supporters Shield (Best Record in the MLS during the Regular Season).

I’ve already spoke on behalf of Giovinco, so this is reserved for Cyle Larin. Despite receiving interest from teams all over the world, Europe decided to stay in North America and was selected first overall in the 2015 MLS SuperDraft. Orlando not only needed a star like Kaká to fill the stadium, but Orlando demanded a young core to construct a blueprint for future success.

On May 3rd, Orlando’s first-team striker, Kevin Molino, suffered a season-ending injury. Larin immediately became a starter and was been looked upon to become the primary goalscorer. Larin stepped up and destroyed expectations. His rookie campaign featured 17 goals, including two games with three goals. Only 20 years of age, Larin already has two MLS Single-Season Records to his name: Most Goals by a Rookie and Most Goals by a Canadian in a season.

For Larin, a no-brainer selection for Rookie of the Year, the sky is the limit.