Russell Westbrook is, in a true sense of the word, a freak.

Even with his fashion choices set aside, Westbrook is still a monster, one that noone wants to mess with. His athleticism is greater than any other NBA player, and his ferocity is on par with that of Michael Jordan and LeBron James.

Westbrook cannot be stopped. Not by any opposing point guard, or All Star lockdown defender, or the Hulk himself. That was made apparent last season when he recorded 11 triple doubles (7 more than the second most in the league, James Harden’s four) and averaged 28.1 points, 8.6 assists, and 7.3 rebounds per game, with many of his best games coming in Kevin Durant’s absence.

While Westbrook’s superstar partner was riding the bench with various injuries last season, he was busy leading the Oklahoma City Thunder with his superb play. Despite the fact that the Thunder did miss the playoffs, Westbrook was able to somehow enter the MVP conversation at the tail end of the season. He was just that good.

Now, here we are, three weeks into the NBA season. Westbrook is averaging the same amount of points as last season (with a healthy Kevin Durant starting alongside him) at 28.1, which is good for third best in the league, a league leading 10.4 assists, and an unnatural near 8 rebounds, leading all point guards.

But these averages are modest numbers compared to what Westbrook has truly done to opposing offenses over the first month of the season. Westbrook has scored 40 or more points 3 times in just 12 games. He has turned in two triple doubles, going back to back in games versus Washington and Philadelphia. He has a season high of 17 rebounds, which in itself is terrifying that a point guard could obtain that many boards against a team that has Jahlil Okafor and Nerlens Noel suiting up for them. Westbrook has also been a defensive presence, averaging 2.2 steals per game, good for fourth in the league, and is hitting 1.9 three point field goals per game, ninth among all point guards. 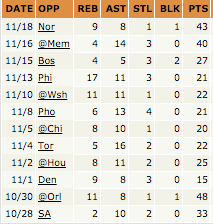 Westbrook has continued to prove his worth, with or without Durant, and doesn’t deserve to be treated as a sidekick anymore. Westbrook is a player, much like LeBron James, who could be put on any team and instantly make that squad a playoff team.

The time has come to acknowledge that Westbrook could not be doing anymore than he currently is to make his team better. Durant, on the other hand, has been meager. Durant’s injury woes still cause him issues, and they limit his abiltiy to win games for the Thunder.

It may finally be time to take notice of Westbrook’s massive talent and, as hard as it to say, he may have ursurped his MVP partner as the best player suiting up for the Thunder each night.