The NFL has stood at 32 teams since 2002, when the Houston Texans were introduced as the newest expansion team. This caused a shift of divisions and conferences, complicating the entire regular season and playoff process.

But, for the first time since 2002, the prospect of NFL expansion is entering the conversation. Cities like Los Angeles, Mexico City, Toronto, London, and Las Vegas all are top candidates to host new football teams. The league will eventually have to capitalize on the markets of these cities. Expansions to new countries, like the UK, Mexico, and Canada, will open up entirely new fanbases and exponentially spread the sport across the globe.

Recently, the headlines have focused on NFL teams trying to relocate to Los Angeles.  The race for an LA team has already kicked off, with the San Diego Chargers, Oakland Raiders, and St. Louis Rams expressing interest in a transplant to Hollywood’s home base. The Raiders and Chargers, according to IB Times, are looking to team up to construct a $1.7 billion stadium for the teams to share in Carson, California, if they cannot reach a deal with their current cities.

Los Angeles hasn’t had a team since the Raiders came and left again in 1995 and, despite the fans’ fairweather tendencies, is deserving of a team in the National Football League. The Chargers make the most sense as the Raiders don’t want to meddle with losing more fans in Oakland or LA as they attempt to rebuild their fanbase.

While Los Angeles deserves an NFL team, they do not in anyway deserve two, which is why this talk of the Chargers and Raiders sharing a stadium doesn’t sit well with me. The city needs to prove that it can be a good host for one team before loading the city up with two franchises. Why transfer two relatively successful franchises to a city that has proven to be a bad host in the past?

Let’s give LA a fresh start, a team of their own choosing, with their own logo and identity. The city has to prove itself somehow, why not this way? Just look at this cool concept for an LA team.

As for Toronto, well, its a bit trickier.

At the NFL Annual Meeting in Phoenix in March, Pegula said, “I don’t think I would have a problem with it if they could support the team, it’s a big enough market.”

The city of Toronto would be a prime candidate for NFL expansion, as their NBA team, the Raptors, have turned heads with their success and flashy play recently. Toronto has proven itself as dominant sports market, and it’s about time the Canadians get their own NFL team. The Canadian Football League just does not suffice, as they suffered their worst viewing ratings in 2014 despite adding a ninth franchise.

The presence of the CFL highlights the fact that the interest in the sport of American football (despite the CFL’s minor rule changes) is high in the country and well worth the investment of a team in Toronto.

However, I am not an advocate for the relocation of any franchise up North – the city deserves its own identity, a new team with a Canadian fanbase to support them, not one with borrowed fans from St. Louis or Jacksonville.

Team concepts for the Toronto football team could get crafty. The snowy weather, tough Canadian identity, and metropolitan area could inspire some cool ideas. Anyone feeling the Toronto Mountaineers? Or the Lumber Jacks? Or even the Toronto Owls? Maybe not, but there are endless possibilities.

Mexico City, another North American city with a strong football interest, poses much of the same issues as a Canadian team does – Visas, taxes, family transplantations, international flights, etc.  But the interest for a team in Mexico City is real.

Mexico City possesses a massive stadium more than capable of housing an NFL franchise. Estadio Azteca can seat more than 100k people. That’s a lot of ticket cash to be made.

The city was the host of the largest crowd in NFL history (yes, you read that right) when the Dallas Cowboys faced off against the Houston Oilers in the American Bowl back in 1994, with the crowd at an astounding 112,376. Mexico City has the largest population of any North American city, and that type of market is hard to pass on when a league as big as the NFL can capitalize.

Still, there is one city that deserves a team just as much as the cities previously listed, but poses the biggest challenge to NFL logistics. That city is London, United Kingdom.

Few experimental sporting events have been more successful than the National Football League’s International Series. This series, an NFL initiative to expand the reach of American Football the sport by the NFL, started in 2007, when the Miami Dolphins hosted the New York Giants at Wembley Stadium in London, United Kingdom. The first 40,000 tickets were sold out within the first 90 minutes of sale time, ESPN reported at the time.

The NFL International Series has grown dramatically since 2007, with the NFL making the decision to play three games each season at Wembley Stadium until its contract with Wembley terminates in 2016. The NFL played one game per year from 2007 to 2012, and then expanded to two games in 2013, and three in both 2014 and 2015. The Jacksonville Jaguars have also signed a deal with Wembley stadium to play at least one home game in London each season, starting in 2013 and ending after this current season. 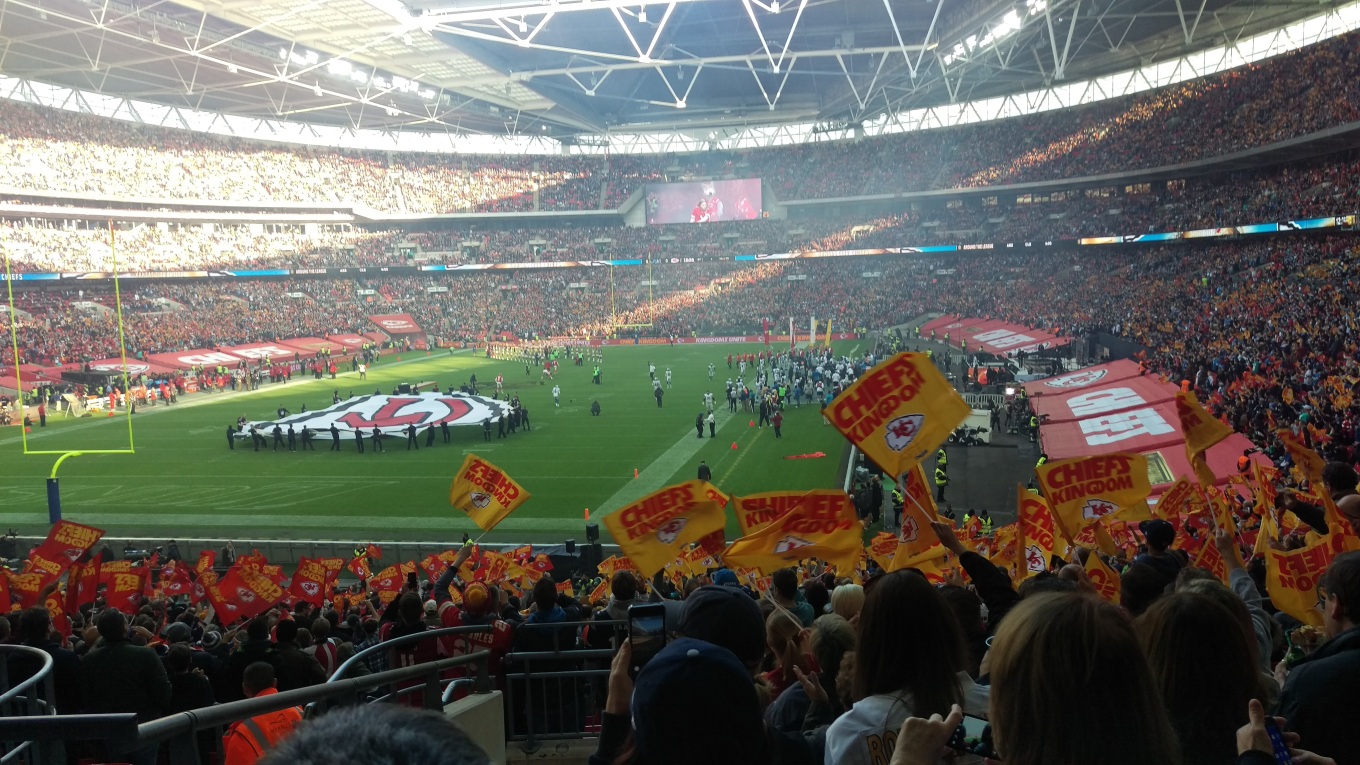 Albert Breer of NFL.com suggested that the NFL would’ve had an even bigger presence in London this year if they weren’t busy hosting other world-class sporting events: “Had it not been for the Rugby World Cup, the league would’ve gone to four games in London this year, so it’s a good bet that happens in 2016,” Breer said.

Jaguars owner Shad Kahn, who also owns the local Fulham FC soccer club, is reportedly seeking to extend the Wembley-Jaguars agreement to 2030, according to Sky Sports. The potential for an NFL franchise, like the Jaguars, to reside in London permanently is a topic hotly debated in the sports world. The idea does have its undeniable benefits. David Kahn of Bloomberg View wrote:

“There continues to be significant momentum for London expansion. A study by Deloitte, commissioned in part by the NFL and released last fall, projected that an NFL team in London would generate $255 million a year for Britain. And the NFL’s international chief marketing officer is on record as predicting expansion to the U.K. by 2022.”

The economic impact of a franchise based in the United Kingdom’s capital would be the leading factor in a team leaving the U.S. mainland for London. Peter King of Sports Illustrated in his column, Monday Morning Quarterback (MMQB), showed the revenue numbers from all three of last season’s NFL International Series games.

While the idea of a franchise based out of the UK sounds like a prime start for NFL expansion, there are many who think that expansion is more vital in closer cities than across the Atlantic.

Nate Silver of FiveThirtyEight Sports wrote that the cities of Los Angeles, Mexico City, Mexico, and Toronto, Canada, all are better candidates for a new NFL franchise than London, although he is an advocate of expansion to all four cities.

Don’t get me wrong, I think LA should have had an NFL franchise years ago, but an NFL team in London would be a monumental step towards the expansion of the sport of American Football globally. There is an interest in the sport in London that would not only support a franchise in London, but help it excel.

However, the idea of a London team, while great in theory and still plausible, has some major hiccups that would require league intervention to resolve. For example, the income tax in the UK is 45% when making over £150,001 per year. That is very different from New York state’s 6.85% when making over $20,000.

Those figures will severely affect free agent interest when a free agent considers signing with the London franchise as opposed to a Texas or California team. Thats a lot of money to surrender. Would the NFL and NFL Players Union be able to work something out with the government of the UK that would allow NFL players to be counted as diplomats, being paid in US Dollars and with government income taxes? Who knows, but that would be vital in bringing an NFL team to life.

Also along those lines is the issues of passports, family relocations, and other problems similar to that of having a team in Mexico City or Toronto. But the biggest, if not the baddest, is the flight time that the UK team, as well as its opponents, would have to spend in the air, travelling to games.

There have been many theories to how to make a transatlantic flight routine in the NFL. The league could expand the season by a week or two, giving every team that plays London’s team a bye week before the match. Or the British team could arrange an American homebase city, where they would be based out of during their four game American tours. A four home, four away, four home, four away season with byes sprinkled between would work for a hypothetical NFL team in England.

Now this schedule talk does raise the point that the flight from New York to Seattle is the same flight length as New York to London. That is great and all for New York and other East coast teams, but how do teams in Seattle, Oakland, and San Francisco feel about the doubled flight period? Not great, I assume.

Still, while very real and problematic, these issues are resolvable in some way. The NFL, NFLPA, and whatever owner is able to make a team in London a reality can find a way to get past these issues.

But London isn’t even the most exotic location the NFL is exploring. The NFL is even looking at playing the 2017 Pro Bowl in Brazil, as its 5th-largest in the world population makes it a possible jackpot for NFL revenue.

It remains to be seen how strongly NFL Commissioner Roger Goodell and his supporting cast in the NFL brass feel about moving a team to the UK permanently. But as for now, UK NFL fans will have to live with three games a year at Wembley, assuming a new deal gets done after this season. But the possibility of an NFL team playing out of London in the near future is at its peak.

The NFL has stood still without adding any teams for the longest time currently since the gap between the Seahawks and Buccaneers were introduced in 1976 and the Panthers and Jaguars were added in 1995. The current time period of 13 years looks to be coming to a close soon, as the NFL is surrendering money every season it doesn’t add to its current pool of 32 teams. No matter how little power Roger Goodell appears to have, he is still very much a fan of NFL expansion, and I wouldn’t be surprised if each of these four cities listed – Mexico City, Toronto, Los Angeles, and London – all have teams by 2025.