That was the motto and stigma around baseball’s most recognizable franchise for as long as many young fans can remember. The biggest budget always bought the best players, rendering small markets such as Oakland down to virtual farm systems for the Yankees.

There was no need to trade prospects for better, more expensive players because New York didn’t have any of the former and had enough of the latter on their own. The 2000’s era exemplified this team’s mission; Alex Rodriguez, with his steroid allegations and monster contract, was the face of the franchise for the decade and beyond.

That era of the Yankees is slowly coming to an end, and transitioning into something we haven’t seen from this team in quite some time. With trades of hot commodities like Aroldis Chapman and Andrew Miller for a host of prospects, New York is — dare I say — rebuilding?

Yes. Not only that but they are intelligently rebuilding. A July surrender is hard for the front office to swallow, especially the Yanks’. They have made the best of it, though, and there’s possibly more deals to come.

The farm system is balanced and talented. The best homegrown prospect, right fielder Aaron Judge (#42 on the midseason Top 100), is now joined by center fielder Clint Frazier (#21) from the Miller deal in the outfield. Both have dynamic bats and project to make up the bulk of the lineup once Brett Gardner and Jacoby Ellsbury are out of the picture.

In the infield, shortstop Jorge Mateo (#19) is joined by second baseman Gleybar Torres (#27) from the Chapman deal. Both have fantastic defensive skills, speed, and vision at the plate. Torres, in particular, has been praised by scouts for a mature approach at the plate and a great overall game.

Mateo has been stealing bases left and right (174 in five seasons between low and high Class A) and if he can get his contact rate up, will be an electrifying possibility at the leadoff spot. 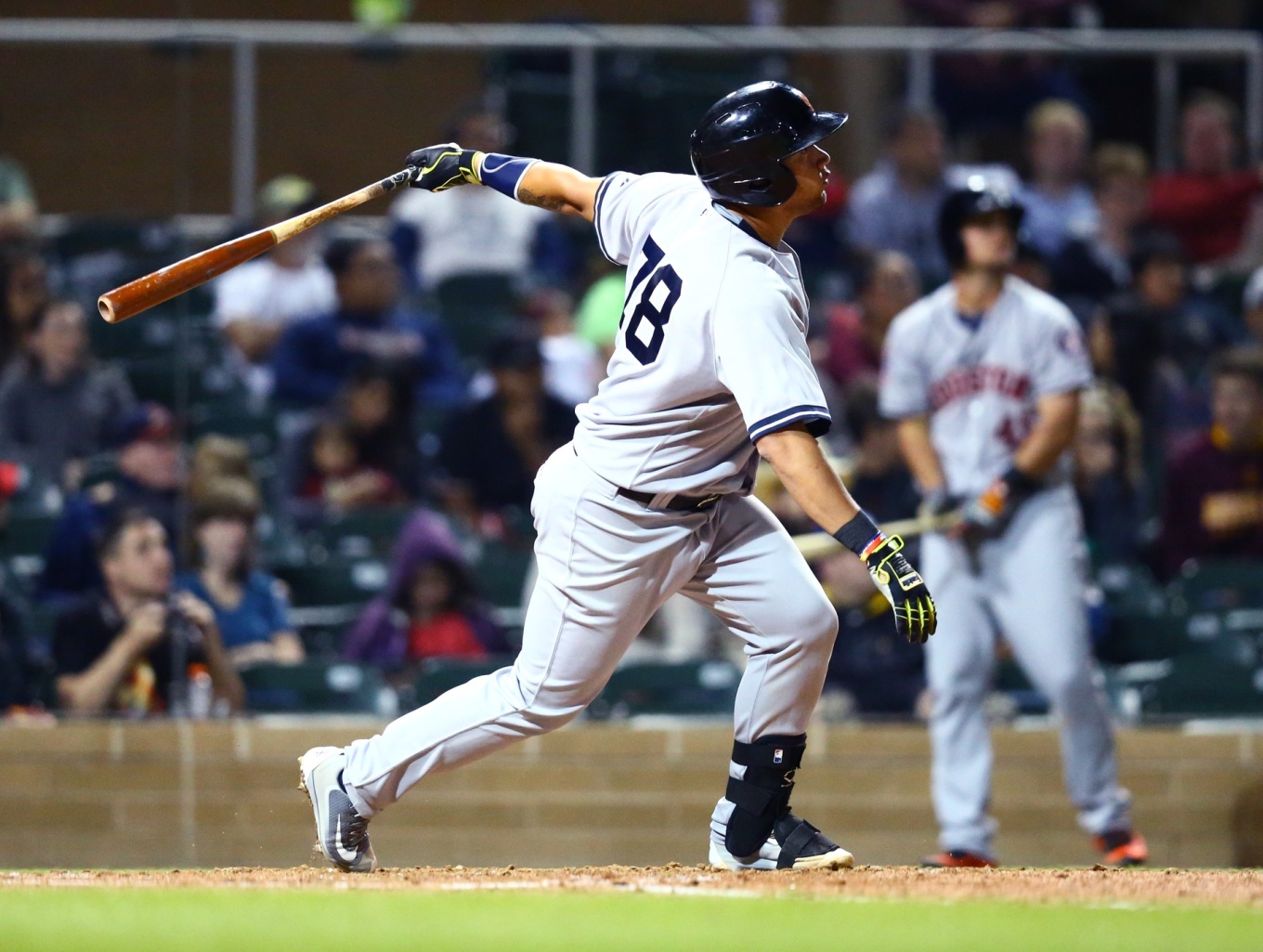 Cather Gary Sanchez (above) is perhaps the most major-league ready prospect. He is already 23 years old and doesn’t really have anything left to prove in the minors. At Triple-A this season, he’s posting a .285/.340/.473 line with 10 home runs and 50 RBI in 281 at-bats. Brian McCann’s contract runs out in 2019 (with a mutual option), but it’s likely he’s traded before then due to Sanchez’s talent.

Starting pitching is less elite, though there are some intriguing names. Justus Sheffield, a leftie starter acquired in the Miller deal, takes over as the top pitching prospect. He repeats his delivery well and has a plus fastball, both signs that project a mid-rotation role as soon as 2018 when he’ll be 22 years old.

Domingo Acevedo is the Yankee’s hardest thrower in the minors and second-best pitching prospect overall — he touched 103 last summer. He stands at 6’7″ and 260 pounds, an imposing figure that would make an excellent frontline starter. If he can’t solve control problems with his slider and changeup he’s likely a future closer.

Let’s round it up: armed with a crop of new talent from two excellently crafted deals, the Yankees have a future outfield, middle infield, catcher, and possibly two future starters. That’s not even mentioning Rob Refysnyder (25 y/o) and Luis Severino (22) who have struggled a bit in their first season in the majors but have abundant time to prove themselves.

At the snap of a finger, the Yankees have something they haven’t had since the mid-90s: optimism for their farm system, and young pieces to build around. The future is even more exciting due to their ever-present involvement in free agency.

Instead of gradually trending away from the caliber of the 27th championship team, it seems the 28th is beginning to form. In dangerous fashion.