In June of 2015, FiveThirtyEight said that as the number of strikeouts in baseball was going up, so too was the number of pitches per at-bat, and the number of pitches per game. Since then, more and more pitches continue to be thrown per game, and the games themselves grow longer and longer: this year, the Colorado Rockies and the Arizona Diamondbacks set the record for the longest nine-inning game ever in the history of the National League, using a whopping 16 pitchers for a total of 355 pitches.

We’re seeing our fair share of numbers in this World Series. The Cleveland Indians have a 3-2 lead over the Chicago Cubs. The Cubs avoided elimination with a 3-2 win on Sunday night. Cubs right hander Jon Lester has pitched 32.2 innings this postseason, striking out 26 over the course of five games, and Indians ace Corey Kluber has pitched 30.1 innings, allowing only three earned runs and throwing 35 strikeouts. The Associated Press pointed out this week that in Game 2, the Indians needed 196 minutes to get 27 outs in a game that took approximately four hours and four minutes to play.

With the end of the postseason and the final stretch of baseball games until next April comes the overflow of think pieces, presenting each and every possibility that the league’s two remaining teams can win the World Series. From your standard blog posts like “Wait ‘Til Now: How the Cubs Can Still Win the World Series” and “Hate to break it to you, Cubs fans: The Indians still control the World Series” to USA Today’s “Simulated World Series” (disclaimer: the simulation is set in an alternate universe in which the series is tied 3-3) column, the Internet is full of hot takes that point out all the ways that each team could win the title. But there’s one way that a team might win this World Series, and it doesn’t involve curses or good luck or Jim Harbaugh. This World Series could come down to a single pitch.

In the past five games of the series, there has been a correlation between the team that gets on base the most off of full-count pitches, and the team that wins the game. 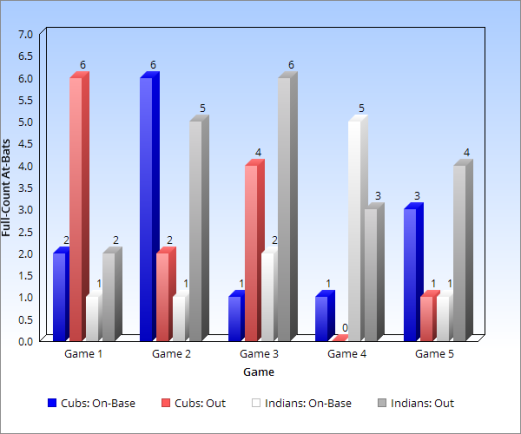 The main point here is that there’s been a trend this Fall Classic: the team that does the best in high-pressure situations–in high-count situations, wins. The facts behind this high-count at-bats pattern don’t just apply to the batters. There’s a lot riding on the pitchers, too: in Game 1, four of those eight Chicago full-count at-bats ended in strikeouts. In Game 4, four of Cubs right hander John Lackey’s five strikeouts came on 2-2 counts. The four batters that Lackey struck out–Jason Kipnis, Carlos Santana, Tyler Naquin and Corey Kluber–have a combined 36 hits and 62 total bases this season when the count is 2-2.

The Indians have been stronger when facing full counts early on: in Game 4, Cleveland’s three runs hit off of full-count pitches all came within the first three innings. The Indians have gotten on base on 34% of the full-count at-bats they’ve faced this series, while the Cubs have gotten on base on 52% of the time they face a 3-2 count at the plate, but Cleveland had seen four more full-count at-bats than the Cubs have: a paradoxical testament to both Chicago’s pitching staff and to the eyes of Cleveland’s batters. The Cubs have the regular season statistical advantage, with a team OPS (which combines a player’s ability to hit for power with his ability to get on base) of 0.871 when facing 3-2 counts this year. That’s almost a full tenth of a point higher than Cleveland’s OPS when facing full counts of 0.778.

All that said, this year’s World Series is one full of numbers, that could end up not being determined by numbers at all. These are the Cubs and the Indians we’re talking about. A billy goat could run across the field during the seventh-inning stretch of Game 6. Rocky Colavito could show up and sing the National Anthem before Game 7, if we get to a Game 7. Rob Manfred could blindside us all and decide that cricket must be played instead of baseball for the last two games of the series, and one of these teams would still find a way to win.

You probably already know that a strike three can win or lose a World Series for a team. It’s happened before (see: 2008 and the origin of the word “Beltran’d.”.) And if you haven’t realized it yet, a ball four can do the same thing: the Cubs (yes, the Cubs) won on a walk-off walk this August.

And if you don’t believe me, and you still want to see how on-base percentage, full counts and yes, walks, can win baseball games, there are still a few hours before game time for you to check out Moneyball.

* All stats are according to MLB.com