Why the NBA Draft Lottery is Rigged

“It’s a rigged system.” Donald Trump spent much of his successful presidential campaign ingraining this quote into our minds. And guess what, Mr. Trump was spot on. Well, kind of. While America’s president-elect was really directing his accusation towards the United States election, its truth resides in a far more serious operation: The NBA Draft Lottery. 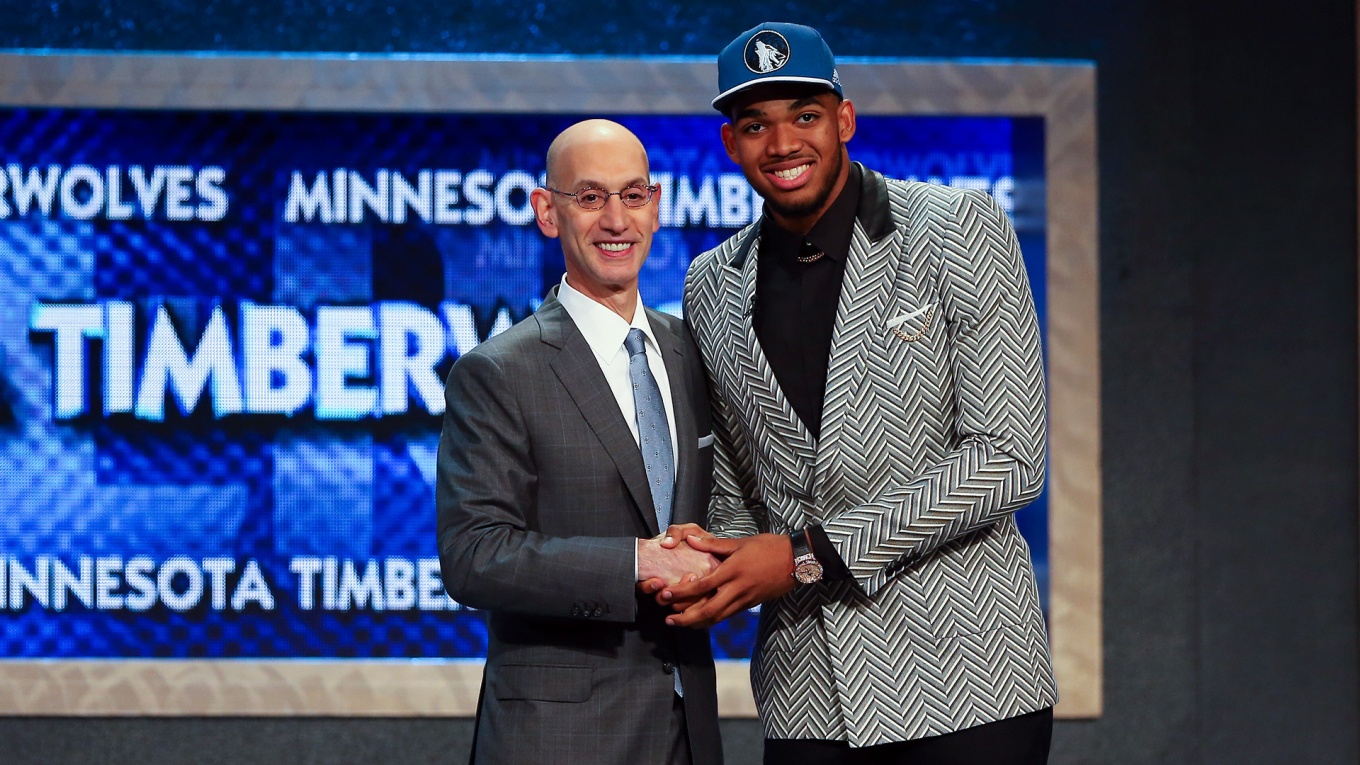 The Minnesota Timberwolves have lost five of their past seven matchups, including an overtime defeat to the Rockets this past Saturday. With the last two Rookie of the Year award winners under contract, along with the introduction of new head coach Tom Thibodeau to Minneapolis, the T-Wolves were expected to make a huge splash coming into the 2016-17 campaign. However, the Thibodeau led squad sits at just 8-19 on the year, 13th out of 15 Western Conference teams.

Although Minnesota has struggled to begin the season, you cannot deny the effort the NBA has put into bringing the franchise back to relevance. Already having young stud Andrew Wiggins on the roster, the Timberwolves were suspiciously awarded the first overall pick in the 2015 NBA Draft, a selection that was used to take Kentucky big man Karl-Anthony Towns. While the club did finish with the NBA’s worst record in 2014-15, giving them the best shot at winning the Draft Lottery, the league’s worst team had won only four out of the 30 lotteries prior.

Nevertheless, the Timberwolves became the fifth team in history to accomplish that very feat, accelerating their rebuilding phase and establishing themselves as basketball’s next big thing. So, does this purported fair game system sound questionable yet?

You may be wondering why the NBA would rig the lottery for a team all the way up in the northern mid-west, whereas big market clubs such as the Lakers and Knicks were sitting there in the top four waiting for the gift that the league granted New York back in ‘85. What you may not realize, though, is that the decision makers at the top interpret factors other than market size to determine which organization should get the next elite prospect. The T-Wolves had a great young core, and the addition of Towns made them an NBA Finals hopeful by 2020. This return of relevance brings an entire fanbase back into the game of basketball, a region that likely hasn’t been engaged in the sport after their team traded Kevin Garnett back in 2008.

After deciphering that, are you really surprised Minnesota came out with the lottery victory? Team success and team popularity go hand in hand, so the best way for the NBA to increase its demand is to have as many contenders as possible across the country. The Timberwolves already employed Andrew Wiggins, but Wiggins alone would not make the team elite. And out of all of the units at the top of the lottery, the T-Wolves were the closest to having a championship-level roster.  For this reason, the NBA knew that rewarding them with the number one pick would help the club make that next step and add another contender to the basketball map.

This, however, certainly isn’t the only instance where the manipulation of the Draft Lottery was evident. For that, let’s go back to that gift New York received in the spring of 1985.

Contrary to 2015, the fixing of the league’s first lottery was an example where the NBA wanted to bring purpose back to a franchise solely because of their large market. By that very ‘85 night, the Knicks were becoming forgotten in the basketball world, 13 seasons removed from their last championship and nowhere near contention. Thus, the league decided to award New York that year’s biggest prize: Georgetown center Patrick Ewing. While there are countless conspiracies of how this fix occurred, such as the “frozen envelope”, there was without a doubt something dubious going on behind the scenes.

Before a weighted system was introduced in 1990, every single team that failed to make the playoffs had the exact same chance at landing the top selection, as was the case in 1985. And, of all the options, the opportunity to take Ewing ends up being given to the league’s greatest TV market? Sounds a little fishy to me.

The next skeptical circumstance of a rigged system occurred in the early 1990s, regarding one of the league’s newest teams: The Orlando Magic. The Magic entered the NBA as Florida’s second expansion franchise in 1989, hoping to initiate fan interest from the Sunshine State. But the team was downright awful during its first three tenures in The Association, never compiling more than 31 wins in a season. The team entered the ‘92 lottery with the league’s second-best odds at landing the top pick. But this year’s number one selection was no ordinary one; it was the chance to grab LSU star Shaquille O’Neal, one of the best big men to enter the draft in years.

And, of course, guess who won the lottery and the rights to take the 7’1” freak: That’s right, the Orlando Magic.

But it doesn’t stop there. While Shaq led the Magic to a 20 win increase his rookie year, Orlando just barely missed out on the playoffs, and entered the Draft Lottery once again. Albeit this time, the team had the worst chance of all 11 lottery clubs at being delegated the number one pick. Despite the near impossible likelihood, this is when the unthinkable happened.

As David Stern pulled out the Magic logo to place under that giant number “1”, Orlando became just the first of only two teams to this day that have won the Draft Lottery in consecutive years. The Magic ended up selecting Chris Webber, before trading the Michigan star to Golden State for 1993’s third overall pick: Penny Hardaway. This Hardaway-Shaq combination became a second coming of Magic and Kareem, and was featured in a recent ESPN 30 for 30 entitled “This Magic Moment”.

The 1992 and 1993 lotteries were two more instances where league tampering was no doubt in play. How else can a franchise land a player of Shaq’s magnitude one year, and then proceed to be granted the next season’s number one selection while having the lowest odds to do so?

No matter the uncertainty, this devious arrangement gave the new Florida fanbase a contender, and a team that could follow the Chicago Bulls as the East’s next superpower before other circumstances came to play that are highlighted in the 30 for 30 mentioned above.

For our next piece of evidence, let’s skip all the way to the year 2003, where high school senior and Akron, Ohio native LeBron Raymone James was preparing to declare for the NBA Draft. Meanwhile, LeBron’s hometown Cleveland Cavaliers were one of the worst units in basketball, playing poorly enough to warrant expectations that a Cleveland-LeBron marriage could be a possibility. However, the reality of a LeBron-led Cavaliers breaking the Cleveland sports curse was something northeast Ohio fans could only dream of at the time. The Cavs were 17-65 the season prior, and had around a 22% shot at landing the pick that would set up the hometown alliance, but would need to become only the fourth team ever to win the lottery while having the greatest chance to do so (no matter how odd that statistic may seem).

Ultimately, James’ rights were, in fact, awarded to the Cleveland Cavaliers. I mean, how else would you expect the league to rig it? LeBron James, Ohio’s golden athlete, leading a Cleveland sports franchise to the city’s first title since 1964; You don’t get better, or more obvious, than that.

Yes, James’ talents on any team would have brought more fan engagement for that specific club. But the NBA knew that LeBron on his hometown Cavaliers would bring a tremendous basketball following back to Cleveland, a location where the NBA hadn’t been prominent since Michael Jordan hit “The Shot over Ehlo” back in 1989. The increased audience that would ensue from LeBron staying in northeast Ohio would be a far higher escalation than the St.Vincent St.Mary star being awarded to any other roster. Consequently, it was the Cavs who received that top selection in ‘03, thanks in large part due to the suspicious actions of the NBA.

Cases like that of LeBron and the Cavs aren’t an abnormal result of the Draft Lottery, as the greatest stories seem to always win. What could the NBA really use in 1985- How about more viewers in the Big Apple? What about ‘92 and ‘93- Maybe some additional fans for the league’s newest franchise? LeBron James is likely one of the greatest draft prospects in decades, who should get the chance to snag him- Perhaps his hometown Cavaliers, a team that hasn’t been relevant in years? These stories are a constant in the current lottery system, up to and including recent examples such as Derrick Rose’s Chicago reunion in 2008 and Cleveland’s lottery “luck” yet again that ended up enticing LeBron back home after he left in 2010.

These days, the envelopes aren’t even opened in front of an audience. Rather, ping pong balls are “randomly” chosen behind closed doors, for none of the public to witness. This further exemplifies that the NBA isn’t even denying their doctoring of who comes out on top, and neither should we.

But, in the end, why are we even complaining? The NBA is just trying to distribute talent evenly across the league while constructing the best storylines possible. So shouldn’t we be thankful of such an easy process of doing this? Shouldn’t we be grateful that the Draft Lottery provides us a simple method of falsification? Because I’m sure when your favorite team benefits, you won’t be crying for “justice” then.